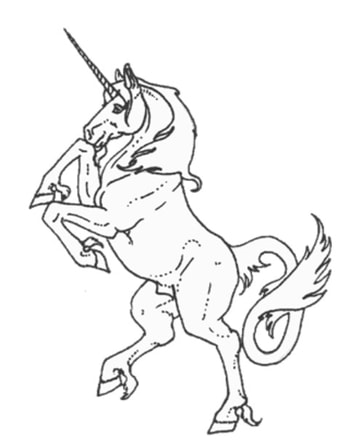 Unicorn
Key words:  Intellectual, rational, curious, radical, imaginative, persistent, achieving, sensitive, insightful, warm, careful, emotional, supportive, thoughtful, perceptive, altruistic, and unconventional.
As an Air type, the Unicorn is not generally person-centered but the Water secondary ensures that they have a marked sociable streak.  They can be quite talkative and witty, especially when in the company of people with whom they feel at ease.  This does not mean that they are outgoing by nature - often they are very shy.  This is one of the apparent contradictions of the Unicorn, and one of the things that can be confusing for other people, is the volatility of Air allied with the changeable nature of the Water making unicorns unpredictable.

Unicorns are intuitive and have a natural psychic sense due to the influence of Water but they remain predominately rational due to Air in the primary position.  Unicorns, because of the emphatic qualities inherent in Water coupled with the communicative facility conferred by Air, are often gifted seers and counselors, particularly within a structured system.
Copyright © 2021  All rights reserved.                     MisplaceDolls.com and Peddlerscache.com