A long time ago and far, far, far away… (actually it was right here last Tuesday), some of the Dusty Mytes decided to hold a meeting.  Now if you or I would have been there we would not have heard a thing.  Why? Because Dusty Mytes (also known as DMs) mind-talk to each other and without Efem and her sister Cornelia around there is no one to interpret their language.​
Anyhow, at their meeting they decided that now that they had made peace with Nemmer, they wanted to find a way to show him that they were useful to have around.  After many suggestions and a long discussion (actually it only took a couple of minutes)… the DMs decided that Nemmer and Cornelia must not have a house Brownie (read more in Passporte's Travel Journal) as they hadn't seen one around their place. That being the case, they thought they would clean Nemmer and Cornelia's cottage for them.  Wouldn't that be a lovely surprise?  So off they went.
The DM's also found a note that Cornelia had left telling Nemmer she was out looking for The CAT.  Realizing their good fortune that the house was empty they immediately started on the house work.  This would be the perfect surprise for Cornelia and Nemmer and would be a good sign of the new friendship the DMs were hoping to show them.  With their bodies being fluffy and wool like, they decided they would start with the mopping.  The youngest DM jumped into a bucket of water that was in the kitchen and started wiping down everything with his little body.  The other two decided they were going to see what needed to be done in the other rooms.
Soon they were done… dishes wiped off, counters dusted (literally), and even the windows sparkling clean (kinda).  Since Nemmer and Cornelia still had not returned, they decided it was best to leave the cottage and watch for them outside.  They had already decided not to show themselves until the couple had a chance to see the good work they had done in friendship.  They were so excited and looked forward to the surprise, so they brushed away all of their tracks and waited in the bushes. 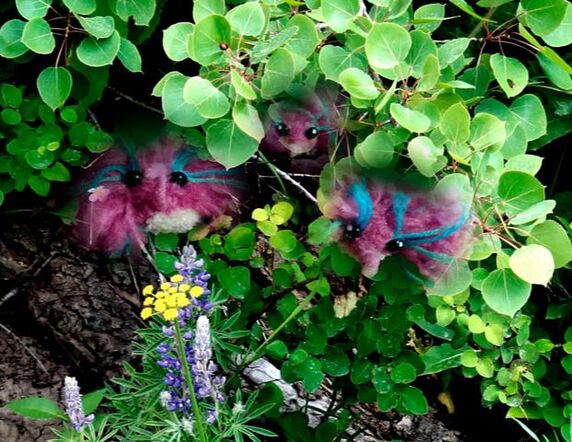 Not long afterwards, Nemmer arrived and opened the door to the cottage.  As he stepped in he suddenly stopped and just stood there.  The DMs held their breaths, waiting to see what Nemmer’s reaction would be.  As they were about to come out of hiding they realized that Nemmer still had not moved.  What was wrong?  Was he upset?   Why did he not move or say something?  After another long pause, finally the youngest Dusty Myte was picked to see if it could find out.
Now they just knew that  Nemmer was going to go back to scooping them up and bopping them on the heads.  That gave them such headaches!  What were they going to do?
It was at this time that Cornelia arrived.  She saw all these pictures of her house going off in her head and felt the panic!  What was all this about?  As she got closer to the house, she saw a little pink tail sticking out from under a bush and soon realized who was talking in her head.  Speaking to the Dusty Mytes (in her own special way), eventually she managed to get the whole story (it is difficult when a group of Dusty Mytes all are talking at the same time).  She did love these fuzzy little fur balls and realized she needed to do something to take care of the situation.  She sent the oldest Dusty Mytes to find a House Brownie.  Now House Brownies are one of the few fae that are not affected by DM dust.  It is assumed that since House Brownies usually wave wands around when cleaning up dust, they don't get close enough to be affected by it (but who knows, the Brownies won't give up their secret).  Soon Granny Flare arrived with the oldest DM rolling in right behind her.  She had been in the neighborhood she said when this Dusty Myte had found her.  "This sounds like quite  the catastrophe!"  Granny said, " So I hurried right over to see how I could be of assistance."
Granny replied “I can do it, and I will need the Dusty Mytes to help, so stop worrying,   I need you to tell them something for me and we will see if it works.”  Quickly the Brownie tells Cornelia her plan and Cornelia relays it to the Dusty Mytes.  Soon the cottage was cleaned and Nemmer settled into his favorite chair.  Cornelia had started dinner, waiting for Nemmer to come out of his forgetfulness stupor.  When he did, she acted like nothing was wrong and asked him if he had found The CAT.  Nemmer didn't remember how he had gotten into his chair let alone remember going and looking for The CAT.  For now he only saw how clean the cottage was and dinner was simmering on the stove.  His tummy started rumbling... almost like a cat purring.
So how did the Dusty Mytes help out?  Well, since every tale should have a happy ending (whenever possible)… this one is no exception.  Granny Flare realized that since Dusty Mytes could blow out forgetfulness powder, maybe they could also use those long noses and suck it in.  She had half of the Dusty Mytes sweeping with their long tails instead of dusting.  This way they made piles of dust that the other half of the Dusty Mytes sucked up.  As a matter of fact, it worked so well, that Granny no longer uses a dust mop when cleaning, she calls for a couple of Dusty Mytes.  At the next Brownie Cleaning Convention Granny Flare intends to show off this new idea and soon Dusty Mytes could be useful to have around everywhere… and hopefully they don’t forget that they suck in the dust – not blow it out. 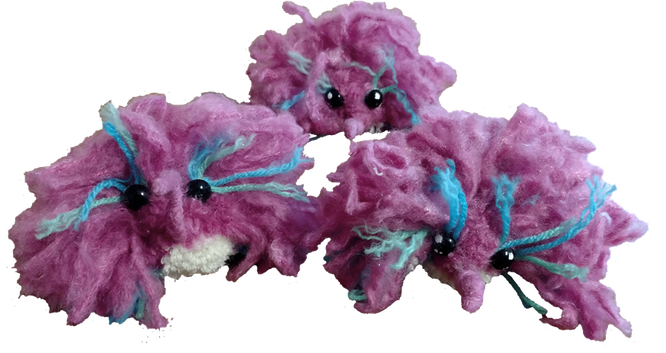