The Mystery of the Blue Rose 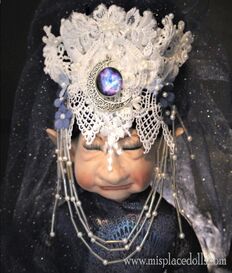 ​Awena was sitting at her desk in her inner sanctum of the building that created the Order of Sleeping Sisters.  She had decided that it was time that someone put to paper how the Order began before the stories were lost to the Winds of Time or like all good stories, changed with the tellings.  So as her candles burned low her quill flew across the parchment scratching out the story.
​The second oldest, Melika, being the beauty of the family with her long dark hair and her violet eyes, was absent mindedly plucking the petals from a flower and thinking of something that one of her many admirers had told her just that morning.

Next to her was her younger twin, Sheridan, being the wild one in the family was also thinking of something that was said to her that morning.  Sheridan had one little problem.  Where Melika was beautiful on the outside, Sheridan was brilliant on the inside.  Being so smart might have been how come she was always getting into mischief.

This morning was no exception as she remembered the scolding she had received from their mother.  She still couldn't see what the fuss was about regarding her simple little experiment.  Just  because the family pet had been turned into a something less than housebroken, it couldn't be that hard  to re-train him she was thinking.

Finally, there was baby sister, Nila, who only had to turn her baby blue eyes toward you and you would be more than happy to give her whatever she wanted.  The only problem Nila had found out was that her ability did not work on their mother.  "Oh, why did she have be with her sisters today!" she pouted.  Plus she wondered, how did her mother hear about how she managed to get one of the stable hands to do her chores yesterday?  "Hmm... makes me wonder what special powers mom has," she pondered.
​On this particular day, the sisters had left the village where they lived with their clan to come out to The Old Oak tree.  Retreating to their favorite spot, they knew that few others would be brave enough to come here.  The sisters knew that the villagers talked about The Old Oak having wild magic and a strange sense of humor.  This made it a perfect place for some privacy as most of the villagers did not want to take their chances of being the elm’s amusement for the day.  The sisters were used to being under the watchful eyes of the villagers as they were also the daughters of the clan chieftain.  Some of those watchers were admirers, but most were just waiting to see what accident or mishap the sisters would create next.
It hadn't felt like a whim to visit the oak today.  Something major was happening in the village but nothing was being said about it.  So many of the elders were running around the clan house, looking worried but not talking to each other.  The girls could not stand it any longer.  Waiting patiently was not one of their strong characteristics and anxiously waiting to see if their father would be summoning them had them itching to get outdoors.  When anything went wrong in the village the people were always ready to blame the sisters.

Just because the sisters would "know" certain things that would happen before others did, or they had a way of talking among themselves that didn't always need words, should not have made them be so different than the rest of the villagers.  After all, Fae blood did run through almost all of the villagers by now. After all it had been many years since the original village had been transported to this magical realm by a wish created by a Wish Dragon.   Still the girls thought it might be wise to escape to their favorite spot.  To hide out for a while to give a chance for whatever had happened to cool down a bit before having to see their father.
​As the girls rounded the last bend in the trail before heading to the stream that ran through the gorge, they all came to a screeching stop.  Laying near the water was a white Dragon half laying in and out of the stream.  She looked tired laying there with her head down on her front legs.  Now why they knew it was a she they didn't know, they could just feel in it in their minds.
​Thinking that since they had been sent by The Old Oak, the girls decided it must be safe to approach the Dragon and see if there was something they could do for it.  Now the difference between safe and foolhardy is a fine line, but the girls did decide that they would be smart and stand far enough back from the head of the Dragon.  Even from there, they could see that she had many sharp teeth even if she did look so sad and forlorn laying in the water the way she was.  As they approached the Dragon, she raised herself and cast her crystal blue eyes upon them.  The Dragon didn't snarl at them or even show more of its teeth, it only just stared as the girls as they approached slowly and respectfully.

​When the girls finally decided that they had come close enough, they each started to hear a voice in their head.  "Why have you come to bother me?  Don't you know that I am tired and have come here to die?" asked the voice.  The girls were horrified that such a thing of beauty would want to die and all exclaimed at once.  "Why would you want to die?"  Each of the girls wondered what could they do to help this beautiful creature?  “Are you hurt?” asked Sheridan.  “What is your name,” asked another.
​The voice in their head told them that she was very old and it was approaching her time, but she had one last wish to leave behind.  The Dragon then told them her name, but they sisters knew they would never be able to pronounce it.  Nila asked if she could just  call her “Bea” which made the Dragon smile.  Now, normally Dragon's just fade away when they die but this Dragon was special.  She was a Wish Dragon who still wanted to give one last tear before she faded.  Legend has it that a Wish Dragon  could cry a single tear for all the wishes that go unanswered and with that tear it could become a powerful talisman for all of the hopes and desires of what can be… if it is saved.
​Enthralled, the sisters watched as the Dragon shed her last tear, seeing it fall upon a pink rose nestled in a bush near her head.  When the teardrop settled on one of the rose petals, the pink rose suddenly turned a brilliant sapphire blue as it was changed by the magical energy of the Dragon.  Quickly the Bee-G's that had been gathering honey in the flowers, swarmed the flower and wrapped the tear within the petals of the blue rose.  They then took their honey and created a cocoon around the petal with the tear safely wrapped within. 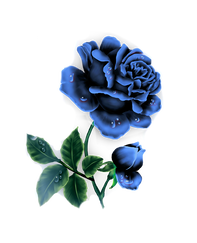 ​“Will you protect it until another of my kind asks for it?” the sisters heard the Dragon ask of them.  “For anyone that has a heart full of greed or the need for power will certainly want to own the tear for their own uses.”  Speaking first, Sheridan replied, “How can we protect it?  We are only girls.  If someone stronger decides they want it what can we do?”
​“We can hide it,” whispered Melika still in awe over how beautiful the Dragon was.  Even if her sisters did not hear, the Dragon did.  Smiling, it nodded its head and again spoke to them.  “That and more you must do.  You have eaten from The Old Oak.  I will add my last bit of magic to that which you have eaten.  Your abilities will be more than up to the task now.”  Slowly the white Dragon began to glow, getting brighter and brighter until the sisters had to close their eyes and turn their heads away.  Soon the light faded and the sisters could see that the Dragon was gone!  Feeling an ache in their hearts they took the tear and started home.
​Soon it would became obvious to the sisters that the Dragon had enhanced each girl's gift.  To Seraphina, the oldest sister, the power of ‘Claircognizants’ or clear knowing was now even stronger.  Of all the intuitive abilities, this one is the strongest because the claircognizant receives information instantly and knows what will or will not work as she would receive prophetic dreams and visions of future events.  She would know instantly which dreams would be true and which would not.

​To the second sister, Melika, her power of ‘Clairvoyance’ or clear seeing became more crystal clear.  It is the form of intuitive ability to see things inside the mind as pictures, images, short movies, symbols, or as impressions.

Sheridan, the third sister's ability of ‘Clairsentience’ or clear feeling made her skin tingle with this new added energy.  This is the intuitive ability to feel or physically sense information in your body.  She would have those “gut reactions” to events or situations that would be true if chosen to follow.

Finally, the youngest of the sisters, Nila, ‘Clairaudience’ or clear hearing became like a tuning fork.  The intuitive ability to hear information inside her mind and receive it as statements, sounds, a song or lyric, or she could now even sense it as a vibration.  This ability comes in very handy when talking to animals and insects she was soon to find out.
​As they left the gorge, Sheridan, who had been thinking about what they must now do told the others about her idea.  “I know how to hide it.  It is simple - we must hide it in plain sight.  We will find a patch of the  Moonflowers.  The tear will be hidden by the blue petals of the Moonflowers and none will be able to  discover it without falling asleep before they do.
So this is what they did as the last Dragon faded from the Realms…